In Altomünster are the Claparede and Tharreu infantry divisions and Colbert\’s light cavalry division. Back in Adelzhausen, the headquarters of General Oudinot\’s II Corps, the heavy cavalry division commanded by D\’ Espagne and II Artillery Reserve Corps. About 40 kilometers east , 4 red dummies are indicating a probable enemy presence

The formula for the presence or not of dummies on the main map is for red flags cells (expresion in spanish), and changed to Windings type text for the flag aspect:

More or less: if the sum of the four cells of the area in Dumm worksheet equals 1, (no matter the formula of sum, there will be only a dummie in each area, therefore it\’s not posible a value plus of 1) cell\’s value is P (flag symbol in Windings text), and if not, there\’s no value in the cell. 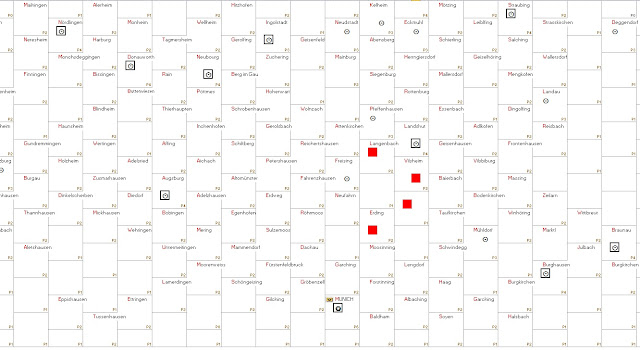 The same dummies in the secondary map. Red Squares also have a symbol painted in red to hide if they are dummies or a real enemy vedette. 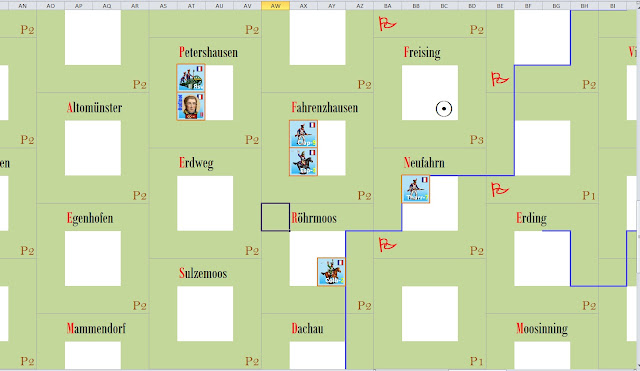 Next turn, the units have been gradually stepped to contain the enemy if it is present. As in the famous War & Peace game (from Avalon Hill), infantry units cannot move by themselves if they aren\’t accompanied by a leader (Oudinot in this case) . The leader has 10 points of movement that can distribute moving units or performing other actions ( destroying bridges, building depots, etc ) . Cavalry units move 3 squares for themselves and artillery reserves move as infantry , with the company \’s leader. In Neufahrn there has been a meeting with the division Tharreau and a dummie.

We change the vision to the secondary sheet, and change the red text color to white (or another color just to make visible the character). We check that it is a \»1\» what means that the dummie is really only a dummie, and delete this red square. 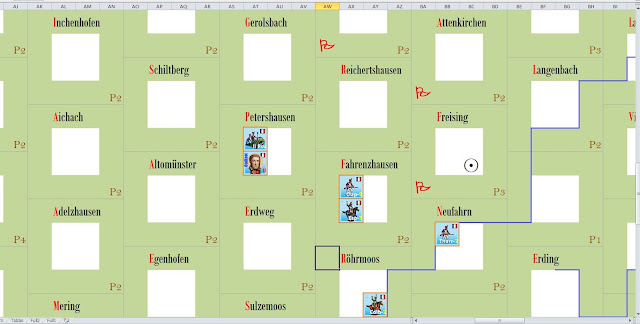 The following turn, dummies move northward of dummies do not put them in contact with any unit in the II Corps, probably their objective is the city of Ingolstadt, 30 km northeast.

We try to block the line of dummies between Wolnzach and Fahrenzhausen. We check the red dummie in Wolnzach, a white square (vedette symbol, it could be another to the player\’s taste) and we confirm that it\’s a vedette of the enemy.

The numbers are favorable to the Austrian Non Player, with 30,000 troops against near 20,000 french. A battle can occur in Wolnzach , with all Austrian troops (red arrows) or two twin battles (orange arrow) with the Austrian troops in Altenkirchen trying to neutralize the French troops in Reichertshausen and prevent they can\’t go to the aid of Oudinot. An interesting situation!
Due to my lack of skills with graphical design, the aesthetics of the units are from many sources: Napoleon Total War modified for leader\’s epaulettes value, the troops design from Fairline (1), really beautiful drawings, the background colors of Jours de Gloire campaings: Allemagne 1813 units, and the leader\’s faces from Napoleon\’s campaign (2007) Pc-game from Ageod.