Saltar al contenido.
Buscar
Cerrar
In another \»twist\» in my always eternal \»to begin\» Bavaria napoleonic campaign of 1809, I decided to try the software Berthier to manage campaigns.
https://sites.google.com/site/berthiercampaignmanager/home
THE CAMPAIGN MAP
I had already tried before, but I think it was very difficult to manage the campaign for its size and number of units. On the basis of my latest map with Excel in the area, I have divided into a grid with squares of 12×12 km, which has given me a final grid of 25×18 cells (300×216 km) from Ulm to Pilsen and Nuremberg to Munich. Instead of a offset squares grid a regular squares grid:
In my previous attempts with Berthier I had made smaller cells to define the roads and the Danube River and its tributaries. This time I chose to simplify the map making, and define the types of colores cells bades in areas as:

The map with MS Excel, with numbered cells and overlayed with some icon maps from Malcom McCallum maps, I already discussed in the blog. Translated to Berthier software (not finished): 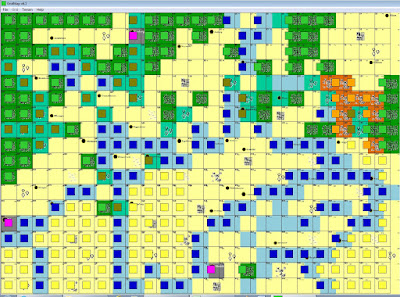 And the final version from Berthier: 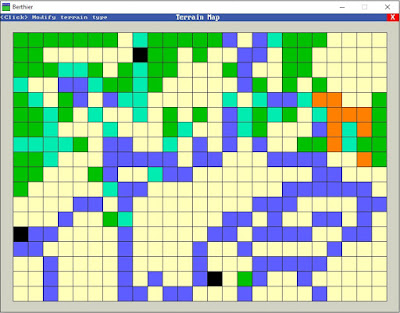 Transferred to the Berthier system we have only the five corps as individual units plus Napoleon HQ (only from 16 april) and two division units of Nansouty and Rouyer.

There are four types of units: infantry, cavalry, mixed (infantry and cavalry) and the HQ.
The initial positions are still not defined because depend on the calendar, the recognition distances based on the scale (more distance for cavalry and minus for infantry and mixed units), and the strenght of units divided by 1000.

To be continued in Part II